What Will You See on a Winter Walk in the Maine Woods?

Let's explore the forest and see who we might meet on a winter's walk.

Welcome to the Maine Woods! I invite you to read the stories left behind on snow-covered ground. Tracks of animals hopping, walking or bounding, tell-tale signs of meals taken, and communications dribbled into the snow, or scratched on a tree trunk. Winter challenges animals with cold temperatures, snow cover and limited food supply. Conserving energy is their prime focus, leaving everyone highly alert to the activities in the forest. So, do the same, be alert, use your senses while walking along quietly looking for wildlife signs on the ground, and above in the leafless trees.

Tracks, like animals, come in different sizes and shapes. Small prints and lines across the snow could be made by a mouse, shrew, or vole. The later prefers to travel in snow tunnels to escape predation. Perhaps you see padded footprint such as coyote or fox, the split heart shaped hoof of deer, or triangular prints of birds. 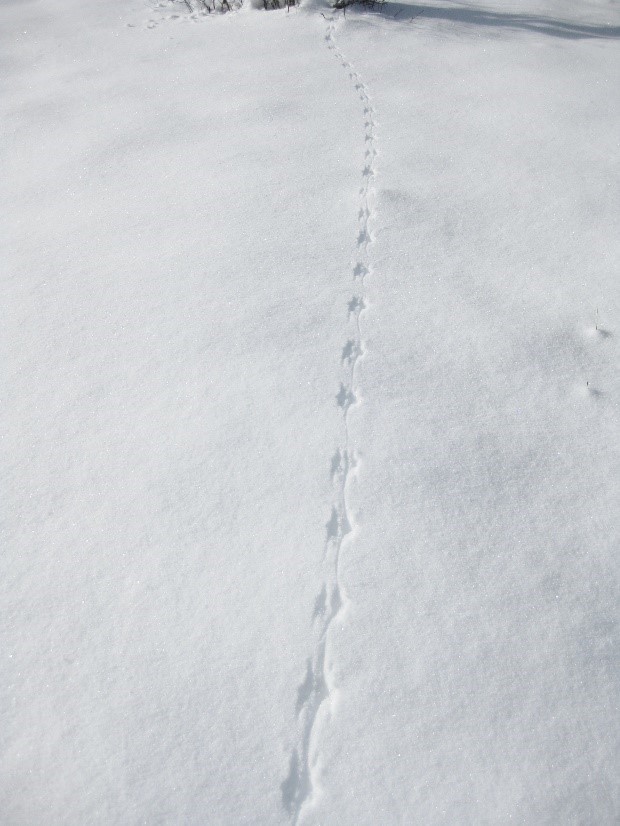 If you find yourself in a mixed or coniferous (evergreen) forest you might be greeted with “chirr-r-r-r-r, chirr-r-r-r-r”, followed by trills and see a red-brown flash. Meet the Red Squirrel, a small rodent weighing up to 9 oz. with a life expectancy of up to 10 years. It has red-brown fur on top, white eye rings frame dark eyes, a white underbelly, and a bushy tail nearly the length of its body. Red squirrel are solitary and fiercely defend their territories against any intruder, no matter the size. During mating season all bets are off, and the male is permitted in the female’s territory. 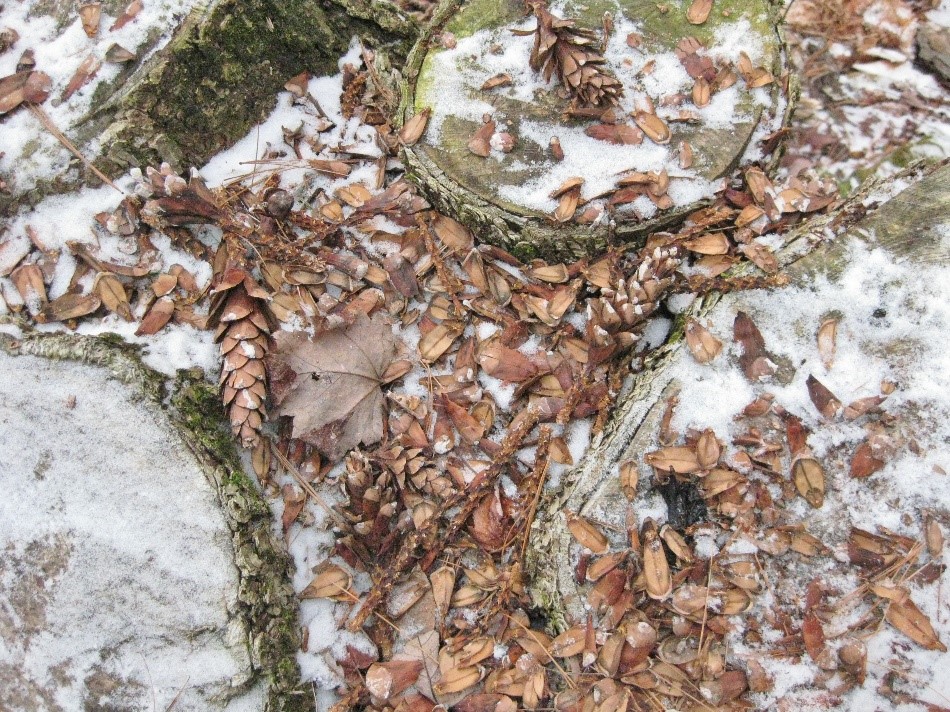 They live near their favorite foods: cones from coniferous spruce, fur, pine, and hemlock trees. You may discover a large pile of cones, and the feeding site with piled up cone scales, called a midden near coniferous trees. Look closely, you might see the round entrance holes to the squirrel’s burrow at the base of the tree. 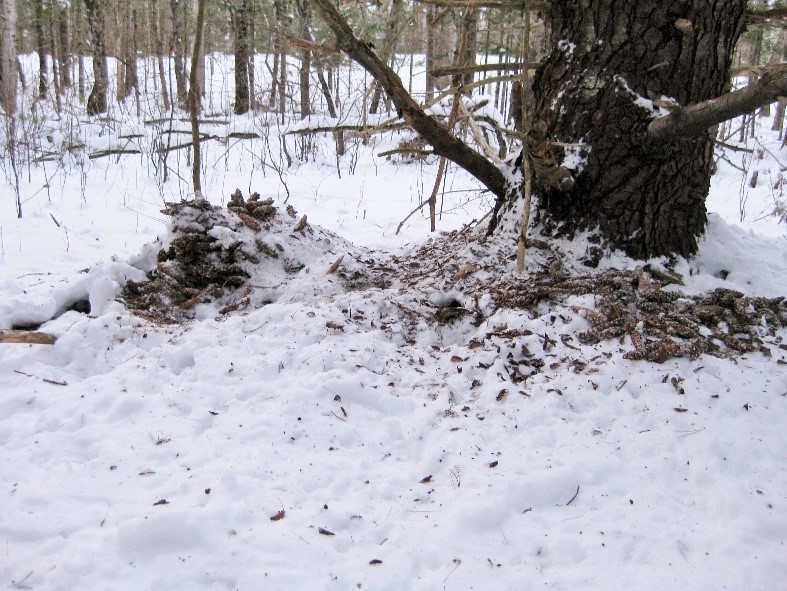 Red squirrel build up large food caches in underground tunnels or above ground. Cones are harvested while green, which prolongs their shelf life. A red squirrel relying on a strict pinecone diet must consume seeds of 100 pinecones a day! Squirrels have two gaits, walking and bounding (which makes the animal airborne). The front track will register only 4 toes, but the hind track will register 5 toes. 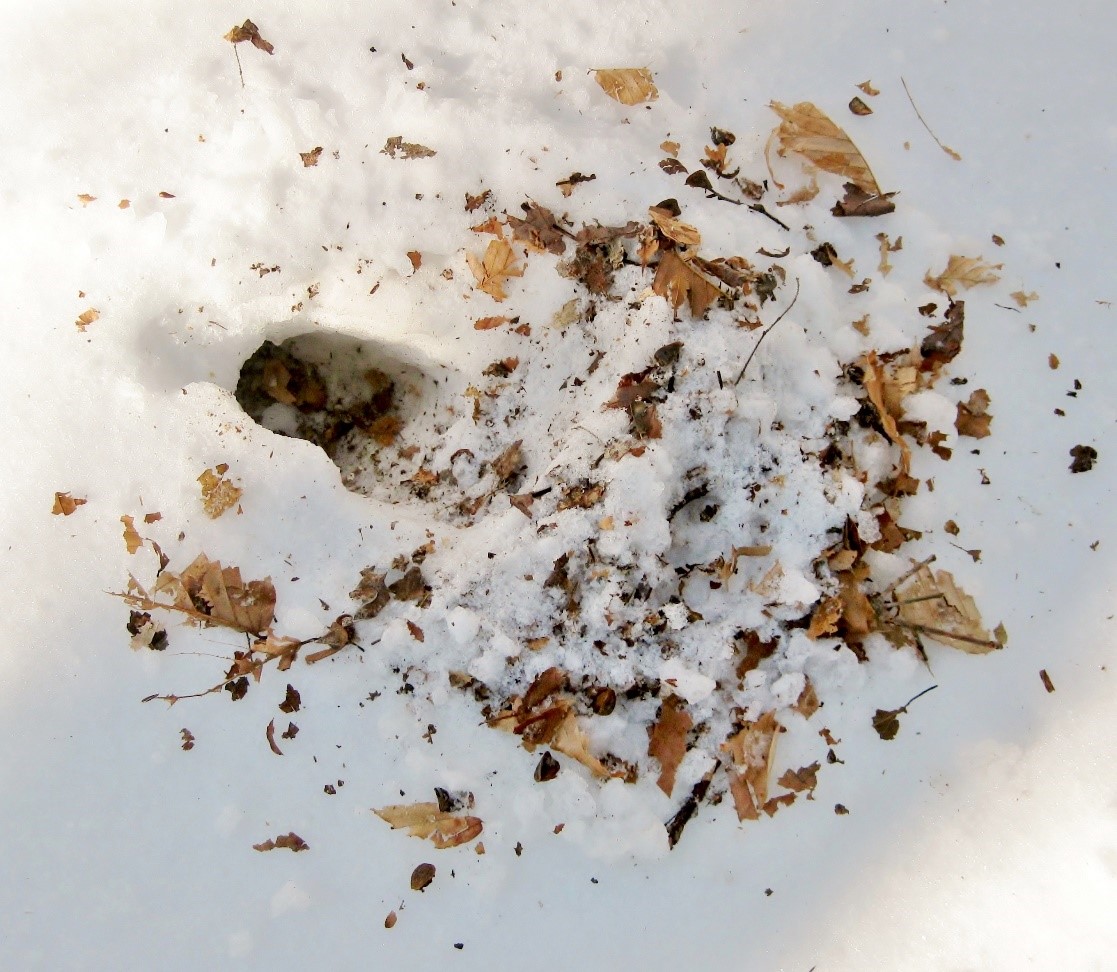 The Gray Squirrel, twice as large as the Red squirrel, rely on acorns, beech nuts, and dried 0, each individually cached, to get through the winter. The photo shows the excavation site of a gray squirrel cache, with the remains of an acorn, eating in place.

Gazing upward you might discover a clump of leaves wedged between branches in a tree silhouetted against the sky. It’s a drey, a Gray Squirrel nest, carefully constructed of intertwined branches and leaves. The center is lined with soft materials like moss, shredded bark, and grasses. Gray Squirrels nest in nut-producing forests that support oak, beech, and butternut trees. Unlike the Red squirrel, Grays are much more social animals. Their life expectancy is 9-12 years. 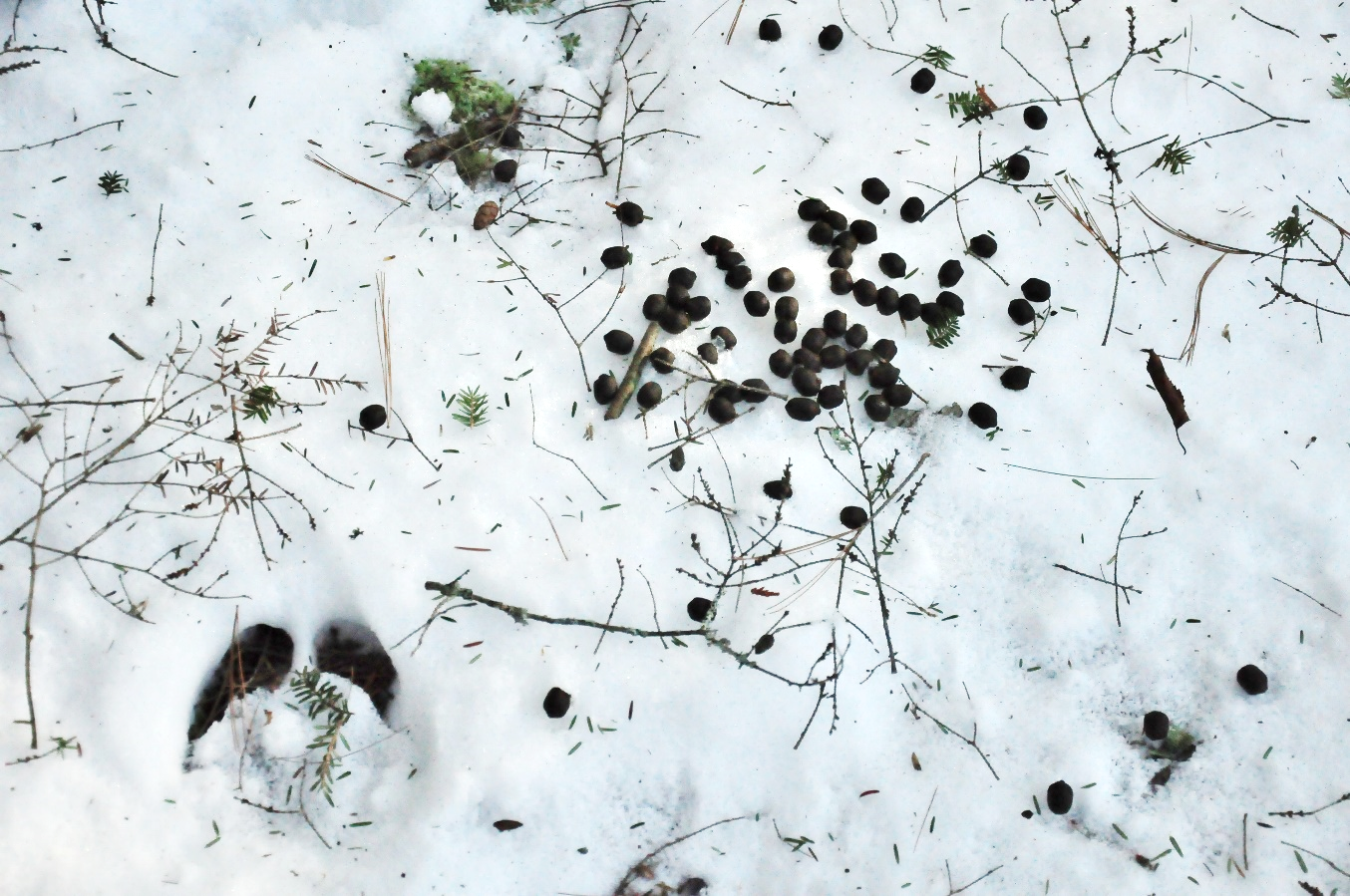 White-tailed Deer leave distinct trails with a ‘split –heart’ hoof prints. Deer have a high footload (it compares body mass to foot surface area), limiting its mobility in snow. By splaying their toes, deer create a larger surface area and reduce footloading. They use established trails to conserve precious energy during these lean times. Like all the ungulates deer walk on their toes. This form of walking requires 30% more energy if compared to their predator the coyote, who walks on the ball of the foot. Deer feed from dusk to dawn, browsing on branches, lichens or dig for acorns, and bed down during the day. The microbial flora in the deer rumen changes to efficiently digest the more fibrous diet of winter. Deer drop their elongated (sometimes round) winter diet pellets all at once, unlike the snowshoe hare, which drops them one by one. White-tailed deer use coniferous forest as wintering areas. Dense canopy cover intercepts snow accumulation thus making it easier for deer to travel. 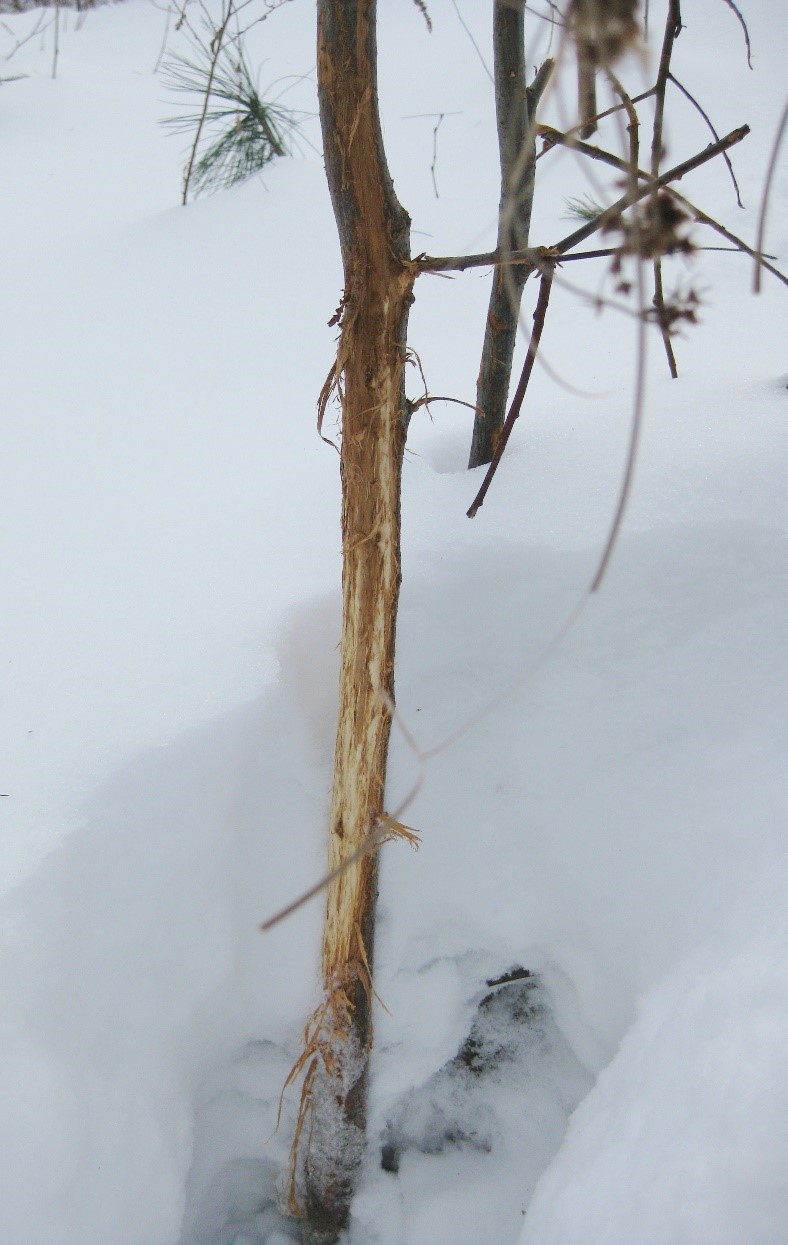 Red Fox The central and northern area of Maine is home to the Red Fox. Look for the solitary Red fox in open areas that provide cover. An adult fox weighs between 8-12 pounds, and is 35 – 41 inches long without tail (12-15 inches). Red fox, like deer, use regular travel routes, conserving energy, a prime focus for all animals in winter.

Their senses are all well developed, particularly the hearing. A fox detects the faint rustling sound of mice and voles under the snow. Once tuned in the fox leaps up, dives forward into the snow to emerge with a rodent in its teeth. Usually they hunt at night, and sleep curled up outside during the day. Only for refuge or when raising a litter of kits does the Red fox retreat to a den. 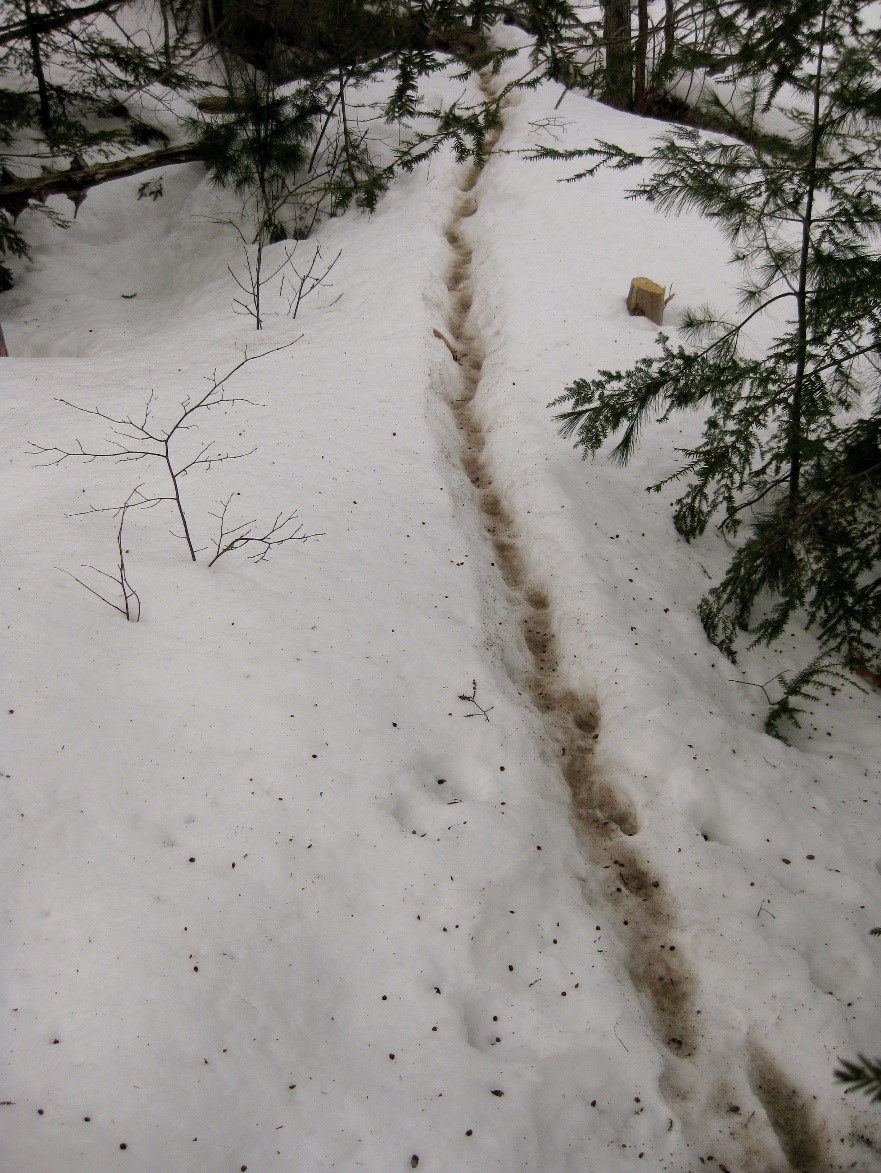 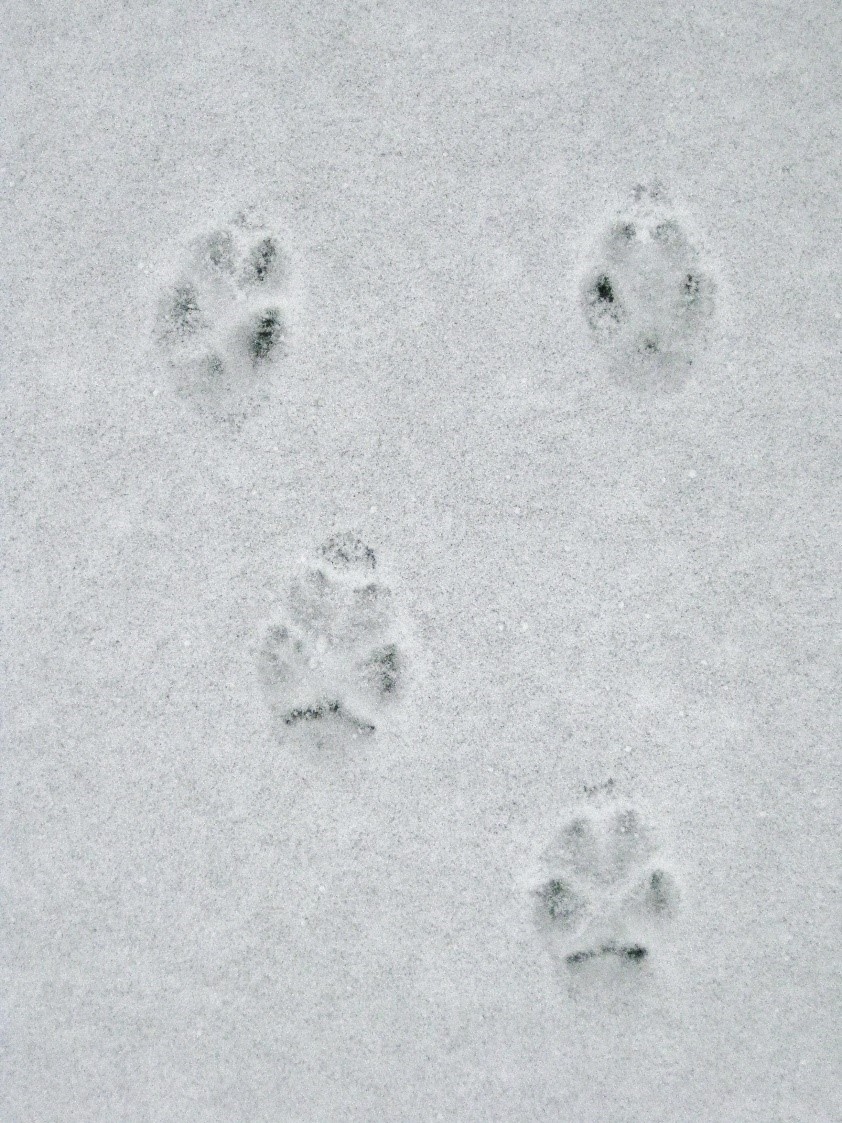 Ruffed grouse is a woodland bird about the size of a crow, with a small crest, and a fan-like tail. Its plumage is a complex pattern made of dark spots and bars, nestled among browns or greys is a perfect camouflage for anytime but winter. The more fibrous winter diet of grouse consists of flower buds from poplar, birches, alders, and willows. Not to become prey for neighboring eagles grouse fill up their crop (enlarged area in the esophagus) quickly and retreat to their roost on lower branches or in the snow for protection and warmth. If the snow is sufficiently deep and soft the grouse dives into the snow to excavate a tunnel and a circular area to spend the night, insulated by a layer of snow. With a snow depth of 6 inches or more the area close to the ground maintains a temperature close to freezing. In winter grouse grow fringe-like appendages on either side of their toes. This increases the surface area of the foot, acting like a snowshoe, one of the grouse’s adaptation for winter. 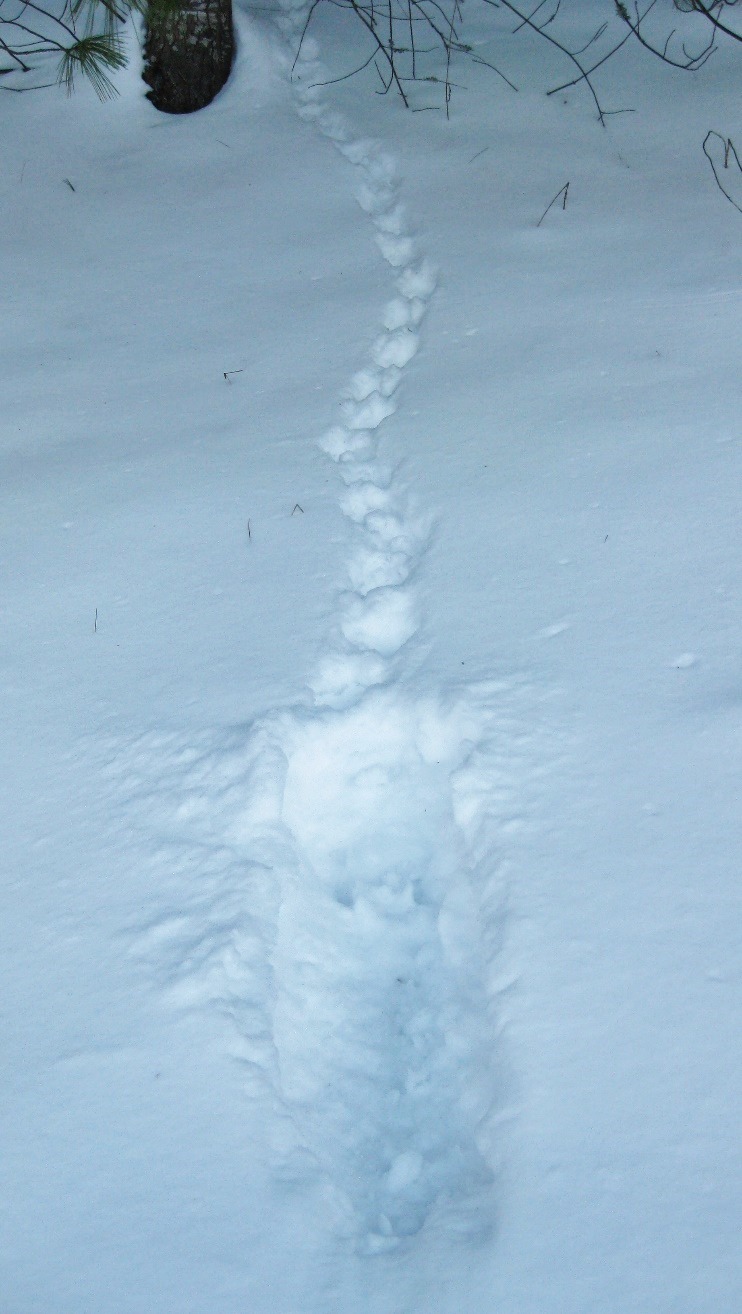 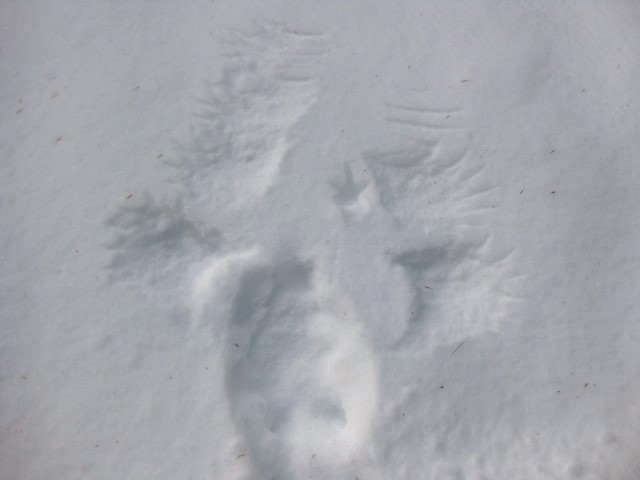 The tracks of the Meadow voles with its tunneling attempts are more often seen than the animal. They live and move in a network of tunnels in the dense grass. Observe a meadow as the snow melts, you will see Meadow vole tunnels crisscrossing the area. 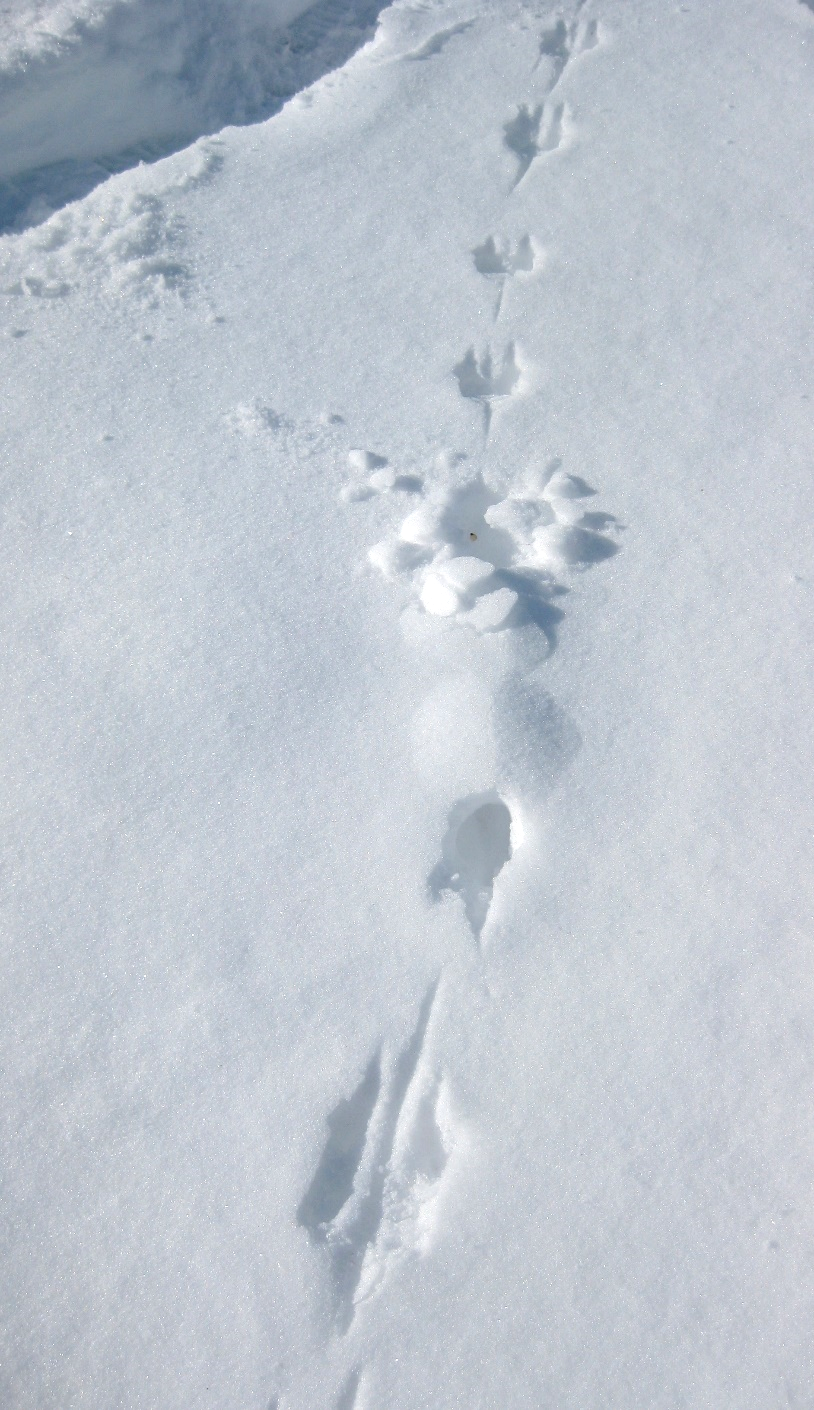 Thanks to its promiscuity (up to 17 litter per year possible!) it is abundant serving as a food source for birds, fish, feline, canine, bear, skunks, snakes, and short-tailed shrews – everybody eats voles!

Meadow voles are 6-7.5 inches long (including the tail). They weigh between 1-2 oz. Their stout body is covered with coarse, a grayish chestnut brown fur, and ends in a short tail with little hair. The ears are small, rounded and lay close to the body. Meadow voles are mainly vegetarian eating grasses, sedges, seeds, tubers, roots, and bark (of your favorite shrub). If available, they eat meat. Look for them in areas near water, wooded swamps, and open woodlands. 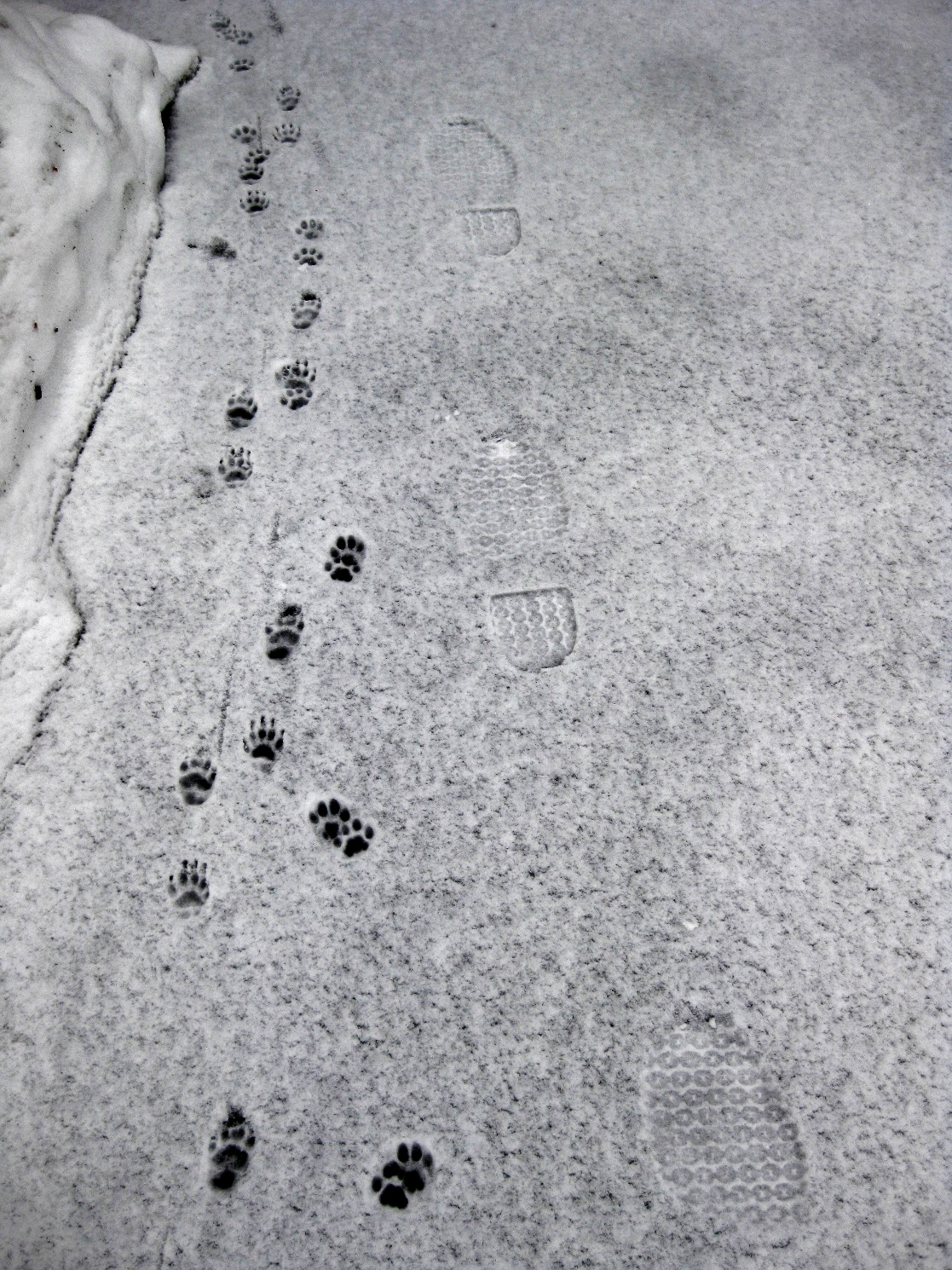 How we move. Most mammals walk and run on the balls of their feet making them efficient runners. Humans and bears, on the other hand, land on the heal first which improves the economy of walking. Walking on balls of your feet requires 53%, on the toes 83 % more energy than landing on the heel first.

Striped skunk tracks show five toes in both tracks. The front track shows five distinct toes and nails whereas the hind track is muddled. It is larger than the front.

Bobcat tracks show four toes registering in front track and four in hind track. Nails often do not register; they are retractable, just as in a house cat. The digital pads are teardrop shaped and metacarpal pad (red circle) is trapezoidal with two lopes on the upper and three lopes on the lower edge. The upper edge of a canine metacarpal pad has one lope.

Human track is a size 9.